A few months back, I began having some wrist pain at work. I suspect that many who work on a keyboard for the majority of their day struggle with wrist pain of some kind. That said, I was a little surprised because I had been using an ergonomic keyboard. In fact, I've been on an ergonomic keyboard for at least 15 years. I hadn't yet tried a mechanical keyboard, though, so I figured it was time to try one out. But first, I want to share the keyboards I've used.

I got my first one in college, out of curiosity. I hadn't been dealing with any sort of wrist pain yet, but I thought it looked cool. I had already switched from using the mouse with dust attracting ball to using one of those new (at the time) laser mice, so why not?

I loved using this keyboard. In fact, I asked for one at my first job, because my first work computer came with one of the cheap Dell keyboards. Before long, I had encountered my first experience with wrist pain.

The only things that prompted me to switch keyboards was:

The Microsoft Natural Ergonomic 7000 came out in 2007 and stuck with me for 10 years. I still love this keyboard and use it at home. The optional attachment to elevate the front also was nice in that it kept my wrists and hands at a more natural angle.

More than any other keyboard, my muscle memory knows this key layout. I'm not talking about QWERTY either. I'm talking about HOME, END, PAGE UP, PAGE DOWN, and F1-F12. I could (and still can) fly on this keyboard.

I even set up Karabiner (and later Karabiner Elements) configurations so that I could use it on my MacBook Pro.

The keys on the keyboard that I've taken between my 3 previous jobs have actually been wiped off from extensive use. You can't see the letters on most of the home row any more.

Researching My Next Keyboard

That said, I did want to try out something new, especially when I began to experience a little bit more wrist pain.

The first keyboard I began eyeing was the newer ergonomic models from Microsoft, like the Sculpt Ergonomic Desktop or the Surface Ergonomic Keyboard. I figured I couldn't go wrong with these given my history with the other keyboards from Microsoft; however, having heard and read so many rave reviews of mechanical keyboards, I wanted to give one of those a shot first.

One keyboard that caught my eye was the Ergodox, specifically the Ergodox-EZ. I liked the idea that it was very hackable, but I also liked that a company was willing to build one for me. I'll probably lose some geek cred here, but I've never touched a soldering iron in my life.

I pinged Josh Lewis because I knew he had built one and he invited me over to try his out.

I knew this would be the case, but I didn't realize the extent to which I would feel lost. Check out this photo of one Ergodox-EZ configuration: 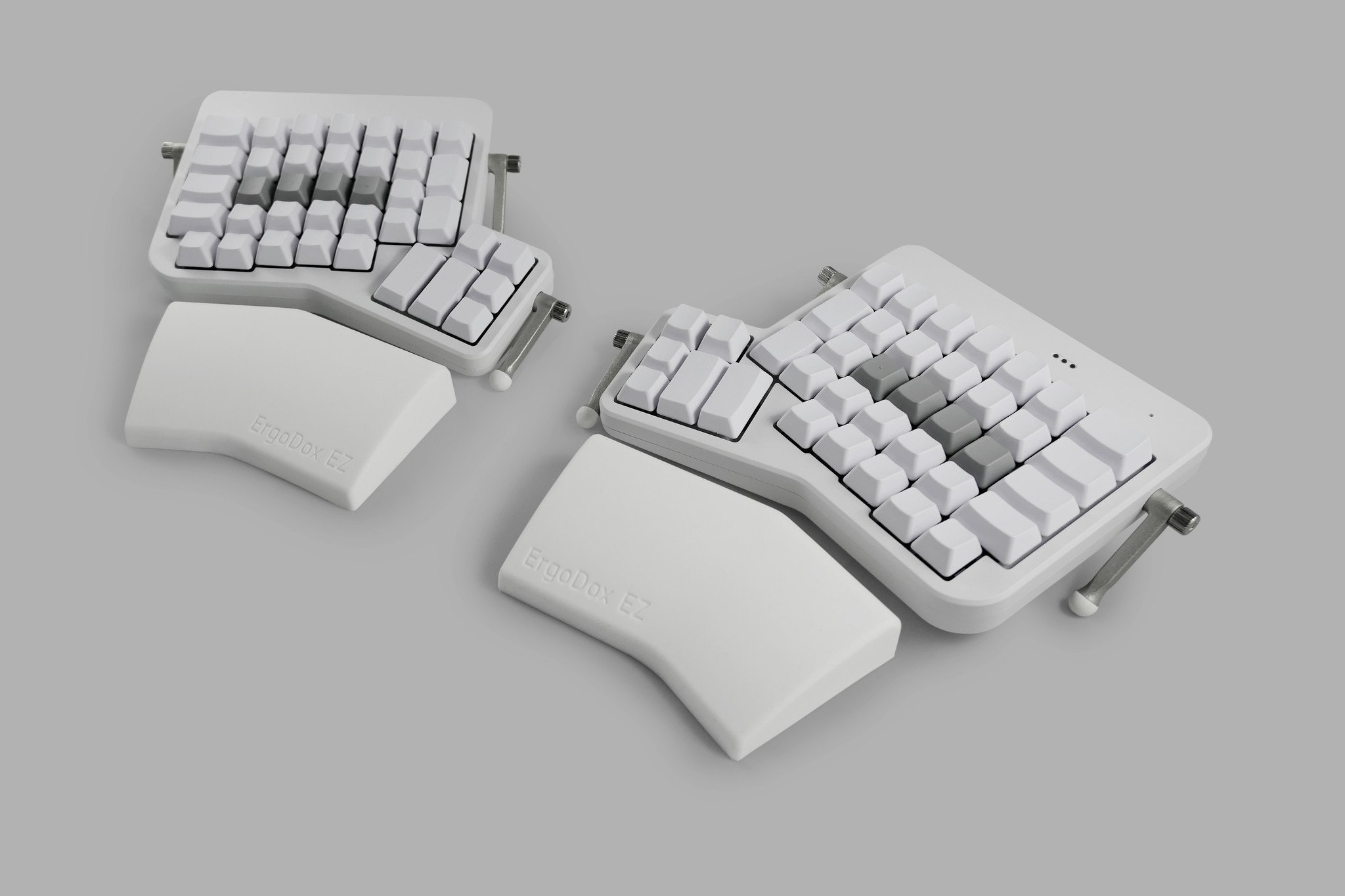 Here are some things to notice:

Ultimately, I decided I wasn't ready to dive in on this yet. I'm still intrigued and I suspect that once someone has learned how to use it, they would love it (sort of like learning Vim). The counter point is that it might be a lot harder to type on a different keyboard (again, sort of like Vim).

Josh did have another mechanical ergonomic keyboard with him, though, that he let me bring home to try - the Matias Ergo Pro.

My first impressions of this keyboard were that it was far easier for me to type on. The layout doesn't change from a traditional layout, but it does ship in two pieces, meaning you can tilt each side and separate them as much as you want.

It was great for me coming from the Microsoft ergonomic keyboards. That being said, I began to notice some issues, specifically single key presses would result in as many as four keys being registered. I did some research and discovered that many reviews on Amazon correlated my experiences.

I began researching more. Based on my short experiences, I had already decided I wasn't going to be picking up either the Ergodox or the Matias Ergo Pro. I had decided I wanted to replace my keyboard, though.

Fortunately, I found some posts about the Kinesis Freestyle Edge. It had gone through a Kickstarter and was launching on Black Friday. My research had begun a week prior, so it seemed like a good option. Besides, I have friends who have some of the other Kinesis models and liked them a lot. Given that the preliminary reviews also seemed great, so I decided to try it out.

It ships with Cherry MX keys (Blue, Red or Brown). I didn't know which would be best, so I went with the Brown variety. I also picked up the optional lift kit, because I knew I'd want to be able to have the keys on an incline.

The build quality of this keyboard is great. It feels amazing to type on the mechanical keys. Even better, it ships with a configuration app so that you can actually remap keys on the hardware versus relying on a software solution. This means I can treat alt as command and the win-key as option for the Mac side of things.

I think my only complaint would be the placement of the control-win-alt keys. They feel especially shifted left as opposed to other keyboards. Check out this screenshot and note how the left alt key is almost under the "Z" key. On my Ergonomic 7000, it is fully under the "X" key, which is almost a full key to the right. It makes keyboard combinations like "cmd-c" ("alt-c" remapped) a little bit more difficult to hit. Even worse is "option-space" ("win-space remapped). It isn't a deal breaker by any means, but it does mean that I have to pivot my hand a little bit. 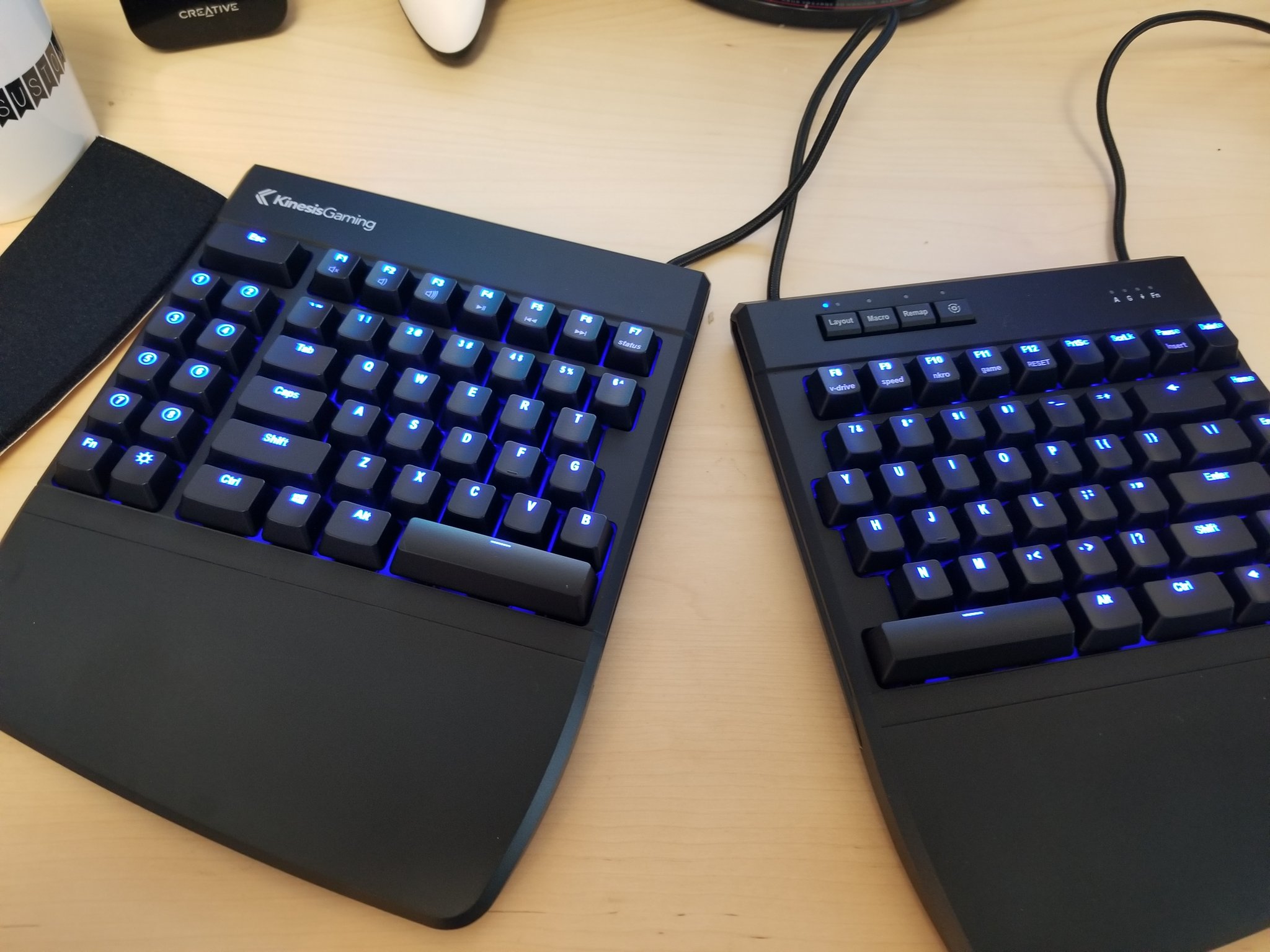 Final notes are that it will definitely take me some time to get used to the placement of the F keys. On the Ergonomic 7000, the F6 key is on the right section. On the Freestyle Edge, F8 begins the right section. I knew that home, end and page up/down would take time, so that isn't a big deal to me.

The only thing that you should note is that there isn't a num pad. It isn't a big deal to me, but some people would miss it. If it is a huge deal, you can buy standalone numpad keyboards.

All in all, I enjoy it. If you're in the market for a mechanical ergonomic keyboard, I'd suggest checking this one out.