I'm continuing my review of Tech Ed from yesterday. Yes I still realize that I'm a month behind. :-)

So, after breakfast, I imagine what everyone will be interested in is the keynote by Bill Gates. Here's the view I had after sitting down: 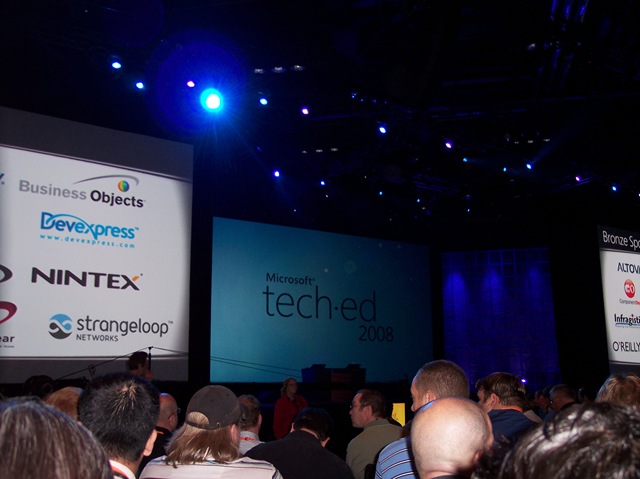 Woohoo! Below is my great picture of Bill Gates, too. I tweaked the image slightly so that you can spot him. 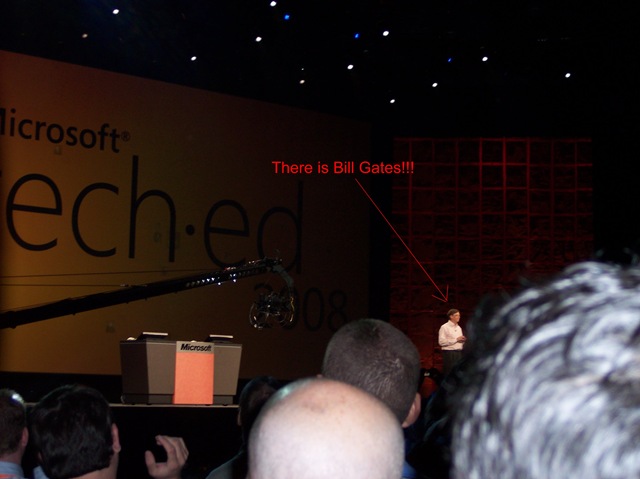 Anyway, keynote... yeah. Sort of boring. They started off with the Bill Gates Retirement Video. I think there might have been a little bit more content than the first time it was released, but still, nothing new. There was talk about Oslo, but I wasn't really interested. I don't really want modeling tools to improve architecture, when the drag/drop designer tools are leading me away from good architecture anyway. If you're interested in any more regarding the keynote, check out Herding Code's overview of the keynote announcements.

The first real session I attended was by Grigori Melnik and he covered Enterprise Library 4. Honestly, my feeling regarding EntLib is way too much XML configuration. I'm also not a fan of the config editor for the configuration. I'd really rather configure it in code or using some DSL support or something. I'm interested in Unity (the one release from Microsoft that got to keep its cool name!) somewhat, though. Unity is Microsoft's offering in the IoC/DI space. It has gotten some flak, but it really isn't all that bad from what little I've used it. I do like that it is very lightweight and the fluent interface it provides for component registration is pretty good. The session itself was mainly demos, though, so not much content.

I walked into a session by Sara Ford on CodePlex, but I didn't stay too long because it seemed to be a walkthrough on how to use the CodePlex site itself.

Another session I attended that day was by Jimmy Schementi entitled "Dynamic Languages and the Web." You can probably guess that this one was primarily on IronRuby. As you might guess, a lot of the talk revolved around how dynamic languages will work with Silverlight. Jimmy pointed out the Silverlight Dynamic Languages SDK which provides tooling for running dynamic languages under Silverlight, including IronRuby, IronPython, and other DLR based languages. It was pretty cool seeing a Rails app running on IronRuby. Jimmy also showed us an IronRuby version of Try Ruby, which runs in the browser with Silverlight instead of having to ship the Ruby commands back to the server to be executed. (note - if you haven't tried out Ruby, go use the Try Ruby site. It is an excellent introduction into an awesome language)

I spent the rest of that day in Hands on Labs (see my Virtual Labs post to get an idea of the what the HOLs were like) and talking to the Microsoft guys. I spent time talking to a couple of developers on the .NET Framework team (whose names I unfortunately missed) and asked them a little bit about the MAF (Managed AddIn Framework). Their advice on that was to check with Jesse Kaplan (does Jesse have a blog I can link to?) so I did exactly that later in the week. I also spent time talking to them about versioning headaches and how we attempt to deal with breaking changes. It was interesting.

Afterwards, they told me that the MSDN documentation guys were looking for feedback, so I swung by there. I didn't get much information from them, but I tried to give them a lot of personal feedback on my feelings towards MSDN documentation. I currently still use Google to get to most of the MSDN help. I told them I used the local MSDN help up until Visual Studio 2005, at which point the help application because too slow to use. They seemed very welcome to hear feedback and I really think they're trying to improve.

All in all, it was a pretty good first day. That night was the vendor party where you basically sold yourself and your contact information for t-shirts and other swag. :-)