In case you haven't heard, Apple has released a public beta of Safari, which is their web browser.

The surprising news is that it supports Windows. 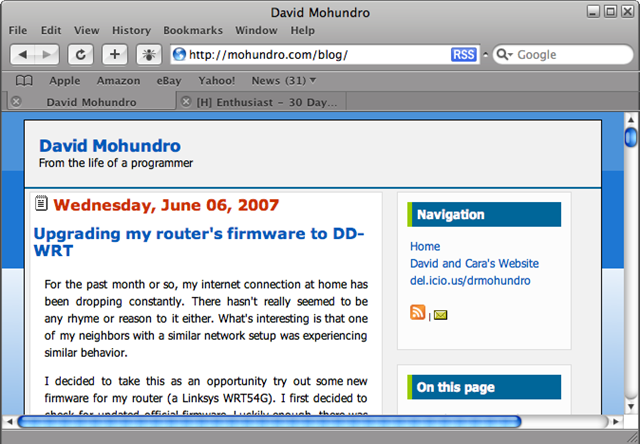 I have to admit that this is a really good move for Apple. Their software has been intriguing me quite a bit lately, and watching John Lam demo Silverlight on a Mac certainly doesn't make me not want to try it out for myself. My only experience with Mac OS X is via tech support while I was in college. We had an iMac desktop in the office for the rare occasion when a Mac user would call in asking for help getting their LAN connection set up (note, the rarity had more to do with the lack of Macs on the network than the lack of problems). The system ran quite slowly because it didn't have enough RAM and it didn't have any software on it. The dock was pretty cool, but it didn't seem to add much value at the time.

Things seem to have changed, though. I would really, really, REALLY like to try out Quicksilver. The Parallels software looks really cool, too. I like Windows too much to switch, but the capability to run both Windows and OS X side by side is very attractive. Everybody seems to like TextMate a lot, too. I do wonder sometimes if I just want Windows ports of these programs or if it really is OS X that seems so nice.

For the time being, I'll probably still stick with Windows Vista. I just like using custom hardware too much to lock myself into Apple hardware right now (that, and I hate not being able to resize windows from the top). If they ever come out with a virtualization option to run OS X on Windows, I would probably give that a try. I would encourage you to check out HardOCP's 30 Days with Mac OS X article if you've been curious what running OS X might be like.