For the past month or so, my internet connection at home has been dropping constantly. There hasn't really seemed to be any rhyme or reason to it either. What's interesting is that one of my neighbors with a similar network setup was experiencing similar behavior.

I decided to take this as an opportunity try out some new firmware for my router (a Linksys WRT54G). I first decided to check for updated official firmware. Luckily enough, there was some updated firmware, though it wasn't what I would call current (i.e. 2005).

Taking a failure to update as a bad sign, I instead took Scott Hanselman's advice and decided to try some alternate firmware. So far, it is working with flying colors and my router suddenly has all sorts of new functionality. It is a little frustrating that the hardware could support this out of the box, but the firmware wouldn't allow it.

Here's what the web administration tool looks like with the DD-WRT firmware installed: 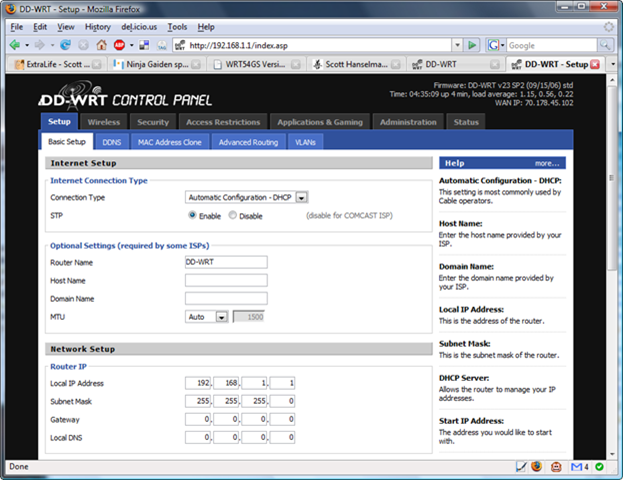 Much snazzier than the "official" firmware.

If you're interested in trying out DD-WRT, look no further than http://www.dd-wrt.com/. I was able to find plenty of resources online for getting DD-WRT working, too. Hopefully, this will fix some of the connection issues I've been having.